Happy 1st anniversary! The story behind this adventure story…

We launched the Enablers of Change concept at the APEN conference in Darwin on the 13th of  September 2019, so we’re celebrating our first anniversary! We know many of you are wondering what the story is behind this adventure story, and how we got here today. So happy first anniversary to us – we’ve made it through a whole year! And this is our 36th episode. That’s three dozen episodes which is pretty good going really… who’d have thought!

We did set this up as an experiment really. We were not sure whether it would work or not, but we decided to give it a go. That’s one of the approaches we have tried to embody: let’s experiment and see what works. Neither of us had done anything like this before, so it was a big leap of faith. But instead of typically overthinking it, we tried to take baby steps and used the agile methodology approach of define, design, quickly test and then analyse how it went. Plus we wanted to do it on a shoestring budget, as it’s a not-for-profit venture.

John has read lots of books like The Lean Startup by Eric Ries, Scrum: The art of doing twice the work in half the time by Jeff Sutherland and Sprint: How to solve big problems and test new ideas in just five days by Jake Knapp. He wanted to trial those approaches and that was a big part of setting up the side business, Enablers of Change.

With any new venture there will most likely be times of doubt and uncertainty, which is why it is important to be clear about the purpose. For us it’s wanting to share our knowledge and experiences about extension with other travellers on this journey.

And for journeys, it is always important to choose your travel companions wisely. When John first started dreaming about this adventure, he realised that while he could perhaps do it on his own, it would be far more fun, and probably less boring for the audience, if there were two presenters.

John knew he was looking for someone with similar values, so we could most likely last the distance together. But he also wanted someone quite different from himself, so they would enrich the stories being told and bring their own personality into it. Someone similar but different, if that makes sense!

So John had a chat with Denise and floated the idea. We realised we do have a few things in common. For starters, we’re both involved with APEN, the Australasia-Pacific Extension Network, the professional association for extension practitioners in Australia, New Zealand and beyond. We have both been convenors of APEN international conferences. Denise looked after the one in Christchurch and John did one in Toowoomba a few years beforehand.

And we had both stepped up to leadership roles in APEN, though at different times. We both served on the Management Committee for several years. John went on to be the President for a few years. And Denise is a regular contributor with the reading brace for the monthly APEN eBulletin.

And in 2017 we both helped organise the GFRAS annual meeting in Australia. That’s the Global Forum of Rural Advisory Services, and involved about 100 people from over 30 different countries. For a variety of reasons, it was quite a challenging event to organise and run, but we worked well together. For Denise it was nice to be back in Australia, as even though she is now living in New Zealand, she was born in Australia! But John was born in Australia and went to New Zealand for a while… 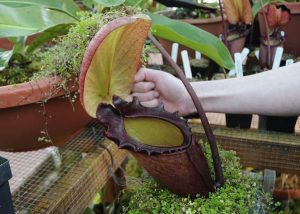 John was born and bred in Brisbane, and when he was in high school he was a keen plant collector. So when he finished school, instead of going to schoolies week, he packed his bags and went on a plant collecting expedition to Borneo. Not just any plants, but the carnivorous tropical pitcher plants, such as Nepenthes rajah. So it was only natural that when he thought about study, he wanted to study horticulture. Back then there weren’t any Australian universities offering degree courses in it. So John packed his bags again and went to New Zealand and completed a Bachelor of Horticultural Science at Massey University. He then returned to Australia and has lived there ever since.

Denise was born in Upper Ferntree Gully, on the outskirts of Melbourne but moved to Lockwood, a rural area outside Bendigo, just before she started school. She was interested in science and ended up studying agricultural science at Melbourne University thinking it would be a good place to start. During the course she learnt about extension. Stuart Hawkins, one of the authors of the extension textbook (Agricultural extension by van den Ban and Hawkins) was still a lecturer and she thought this was more like it… putting science into action! So she started working in extension. Denise ended up in New Zealand in 2002 because of a job opportunity and has been living there ever since.

And so while it might’ve been easier to get this project off the ground and record the sessions with both of us living in the same region, it has given us a great opportunity to improve our webinar skills. 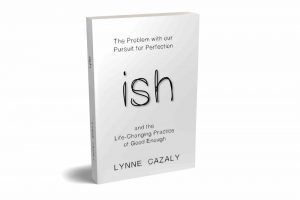 Around the time John and Denise were starting to write episodes for Enablers of change and figuring out what it might look and sound like, Denise read the book ish: The Problem with our pursuit for perfection and the life-changing practice of good enough by Lynne Cazaly. That really helped reinforce that we just needed to get on with it and to stop seeking perfection. It’s better to do something that’s close enough, than to wait forever for perfection and never achieve anything.

And we knew the APEN conference was coming up, so we just bit the bullet and started recording some sessions. We’d already generated a long list of potential topics, as in about 100! We may have also categorised them and colour-coded them, but we quickly stopped planning and moved onto doing – finally creating the recordings!

So that’s how we got to where we are today. In another episode we’ll talk all about the technology we use, as that’s quite a story in it’s own right. But what we’d love you to do now, to help us celebrate our first anniversary, is to give us some feedback about how you are finding these episodes.

To help us celebrate, we’d love you to give us some quick feedback about how you’re finding these episodes. Please complete this short survey… it should only take a few minutes, and we’d love to hear your feedback!

We’re going to run a special invitation-only webinar in a few weeks time to share some more behind-the-scenes stories. We’re capping the numbers to help make it more interactive. To get on the invitation list, all you have to do is to be one of the first to complete our short survey!

So pop over to https://bit.ly/enablersofchange and fill in our survey! It should only take a few minutes, and we’d love to hear your feedback.

Thanks for joining us on our first anniversary edition! As always we’d like to hear your thoughts, so add a comment below this episode and maybe tell us how you have found the journey so far with us.

Thanks folks for reading this Enablers of change blog. Remember to subscribe if you’d like to know when new posts are available. And if you liked what you read, please tell your friends so they can join the conversation! And remember to fill in our survey otherwise we’re only guessing how you’ve found these posts. All the best.

Cazaly, L. (2019). ish: The Problem with our pursuit for perfection and the life-changing practice of good enough.

Thanks John and Denise – have really appreciated your Enablers of Change series. Looking forward to future editions.

Thanks so much Graham! We’ve appreciated your ongoing support and encouragement.

You two are legends – keep up the great work team 🙂

Thanks Chrissy – you’re a legend too!

Congratulations John and Denise! I was at your session at APEN when you launched Enablers of Change and still have the card with the QR code. I’ve followed every episode and found everything you speak about really relevant and interesting! I think you’ve gone into new territory as there’s not many other extension focused podcasts, blogs etc like it! Keep up the great work

Thanks so much Sarah. It’s been great to have you along on this journey with us!

Thanks Sarah – great to have you along from the start!

How to use the third space effectively

Do you struggle with the transition between a busy day at work and then engaging effectively at home? It’s hard to be truly present… Read more »How to use the third space effectively

What other factors affect adoption?

In a recent episode we explored the factors that affect the adoption of innovations but perhaps there are more! It is important for us as… Read more »What other factors affect adoption?

What are the factors that affect adoption?

wpDiscuz
9
0
We would love to hear your thoughts, so please leave a comment!x
()
x
| Reply