Take a break and increase your productivity

What’s one simple thing you could do to improve your productivity and make better decisions? In this post we’re going to explore the benefits of scheduling breaks into your day. 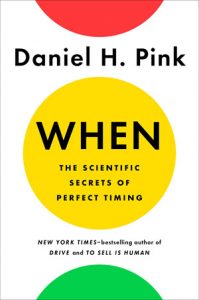 John enjoyed reading Daniel Pink’s book When: The scientific secrets of perfect timing.  It draws upon research from psychology, biology and economics, to reveal the best time to do various activities. Are you a coffee drinker? If you are, the best time for a coffee is not right when you wake up in the morning, as cortisol is produced then which is already helping you feel bright-eyed and bushy-tailed. Instead, it is better to wait 60 to 90 minutes for the cortisol levels to begin flagging, and then have a cup of coffee. About 20 minutes later your energy levels will begin to rise again, thanks to the caffeine.

But what does this have to do with taking short breaks during our working day? In the same book, Dan Pink extols the benefits of taking short breaks throughout the day. One study showed that for those sitting at a desk, a five-minute walk every hour improved energy levels and reduced fatigue, particularly in the afternoons.

A study of Israeli judges showed that while they aspired to be rational and wise, they unconsciously became less favourable in their rulings as the day progressed. Apparently, early in the day they would rule in favour of prisoners receiving parole about 65% of the time. But that rate dramatically dropped as the day wore on, to almost zero. 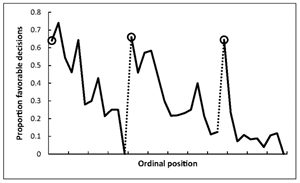 It is a bizarre story! The details of the journal article are below this post. The paper includes this graph of the data which very clearly shows the effect over time.

We wondered if we can extrapolate from that and suggest that the sweet spot for asking a favour is straight after a break? We realised that if we are going to ask a favour of someone, we usually do that earlier in the day, as we’ve found people are more receptive then. Maybe it is because people get increasingly overwhelmed as the day goes on, and are therefore reluctant to take on an extra task. 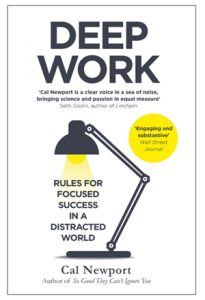 Another book is Deep Work: Rules for focused success in a distracted world, by Cal Newport.  In it he warns us “If you’re working day after day and not letting up, you will burn out.” The trick to not let this happen to you, is to put your breaks in your calendar. If you do not schedule them, your brain keeps saying, “I know I need to take a break at some point. How about now?”

Instead of having that ‘why not now?’ conversation in your head, he says it is better to lock in the time so that you can then focus on your work and enjoy the break even more when it arrives. This refers to both small breaks through the day and also holidays. It is good to schedule them, so you know when they’re coming, and you can really look forward to them.

John says that he likes to take short breaks through the day. He’ll often go for a quick 10 minute walk outside and find it helps keep him sharp through the day. Even though John uses a stand-up desk, he still enjoys being able to escape for a while.

This has summed up some of our thoughts about taking breaks to increase your productivity. Now we would like to hear yours! Add a comment below this post and tell us how you maintain your productivity through the day. We don’t want this to be just a one-way conversation – join in by sharing your thoughts and ideas with us!

Thanks folks for reading this Enablers of change post. Remember to subscribe to our newsletter if you’d like to know when new posts are available. And if you liked what you heard, please tell your friends so they can join the conversation!

This is so true! My kids certainly know never to ask for anything too outlandish once the sun goes down!

What’s so wrong with the Diffusion of innovations theory?

What is the Diffusion of innovations theory?

wpDiscuz
1
0
We would love to hear your thoughts, so please leave a comment!x
()
x
| Reply