What is the Diffusion of innovations theory?

You’ve probably heard about the Diffusion of innovations theory and perhaps you’ve realised that you’re not quite sure what it is and what it means for us as enablers of change. You may have heard of Rogers, but have you heard of Ryan and Gross, who actually conducted the initial research?

In this episode we’re going to revisit the Diffusion of innovations theory. It’s been central to a great deal of extension research and practice, and is one of the most widely referenced theories across all the social science disciplines (Green, 2016). So even if we end up deciding that it’s not as useful as we first thought, it’s worth understanding just what it is and what it means.

Let’s turn back the clock almost 100 years. Hybrid corn was released by the Iowa State Agricultural Experiment Station in 1928 and produced a 15 to 20 percent yield advantage over the traditional open-pollinated corn. Other advantages included the stalks being sturdier and therefore more suited to mechanical harvesting which was also becoming popular at that time. Also the plants were hardier and more able to tolerate the droughts that affected Iowa in 1934 and 1936. Seed companies initially distributed free packets of seed to farmers in the area. By 1939, within just four years, two-thirds of all the farmers were using the new seed. That’s really quite remarkable!

The experimental station funded a rural sociology study to better understand how hybrid corn had spread. Bryce Ryan and Neal Gross, the scientists conducting the work, had seen the emergence of this new technology. They saw that in just over a decade, use of this technology was widespread amongst Iowa corn growers. Naturally, as sociologists, they wondered what was going on. So in 1941 they embarked on a study of two Iowa farming communities to answer this question.

They had three things on their mind:

This formed the basis for their work on diffusion. In many ways it was the perfect time to be doing this type of work. As a result of the two world wars and a depression, with food scarcity top of mind around the world, there was a lot of work going into helping farmers ramp up production. Although the US had been spared a lot of the food rationing that the rest of the world had experienced over that time, the drive for increasing agricultural production was still important! And this made the adoption of hybrid corn seed as a case study extremely relevant.

As Ryan and Gross said, they put together ‘an extensive schedule of questions… to obtain the required data from practically every farm operator in two central Iowa communities’ (Ryan & Gross, 1950, p. 669). They ended up with data from 331 corn growers, but eliminated 64 of these as they started farming after the introduction of the hybrid corn (and so did not choose it over the traditional corn), and a further 10 were eliminated as they grew less than 20 acres and were considered non-commercial. They ended up studying the behaviour of 257 farmers—this was a really detailed study! 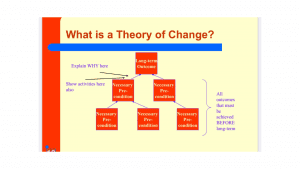 They found there was about five years between the learning about the new technology and acceptance of the technology, as illustrated by this beautifully hand-drawn figure from their 1943 paper. However, this varied depending on whether a farmer adopted the seed earlier or later. The key message was that even though all the farmers generally heard about it at the same time, there were some who adopted it sooner and those who waited much longer. Ryan and Gross found that there was only up to a three year difference in timing of hearing about the new seed; but later adopters could take up to seven years to finally adopt it.

And so to the final point Ryan and Gross explored – the differences between farmers adopting hybrid corn at different times. They spend quite some time on this in the report! They found that younger, more educated farmers were more likely to be the early adopters. In addition, early adopters were more likely to have larger farms. Belonging to a number of organisations was also associated with early adoption and active participation in those organisations also was greater amongst early adopters. Ownership of a farm, as opposed to renting or leasing, was not associated with early adoption.

The social research that Ryan and Gross (and others!) did paved the way for the future work undertaken by Everett Rogers on the diffusion of new ideas. Rogers synthesised all the research that had been done exploring the diffusion of innovations. He compiled it all in his now famous book, Diffusion of Innovations in 1962. This book has become the second-most cited book across all the social sciences, and was pipped at the post by The structure of scientific revolutions by Thomas Kuhn (Green, 2016).

Rogers used the work of Beal and Bohlen, who first described the adopter categories back in 1957. He refined their work and developed the five categories of adopters and theorised that the population was normally distributed. The Innovators (comprising 2.5% of the population) are on the cutting edge – looking for new ways of undertaking their work. They generally not only know the latest trend but are actively developing and trialling it. The Early adopters (13.5% of the population) are the opinion leaders who help bridge the gap between the innovators (who are generally not good communicators) and the early majority. The Early majority (34% of the population) are those who are generally more careful in making choices than the early adopters, though are still open to change. They focus on the pragmatic reasons for practice change. The Late majority (34% of the population) tend to be quite sceptical of new ideas. They only adopt an innovation when they can see it is already being used successfully by many others. Finally, the  infamously named Laggards (16% of the population) strongly resist the change and are the last to adopt the proposed innovation. Rogers developed the diffusion of innovations curve, which shows the distribution of these groups.

Adopter categorisation on the basis of innovativeness. Source: Rogers (2003, p. 281).

What is important to note is that anyone who does not adopt the innovation is not categorised. They are not included! The categories only apply to adopters of the innovation. Non-adopters, those not included, could be quite a large group in some cases. Interestingly, this category was shown in the earlier graph by Ryan and Gross as ‘Never accepted’.

Rogers also described the five characteristics of an innovation that helps it spread: relative advantage, compatibility, complexity, trialability and observability.

Rogers contended that innovations that are perceived to have low levels of complexity and high levels of relative advantage, compatibility, trialability and observability, will be more quickly adopted than those that do not. 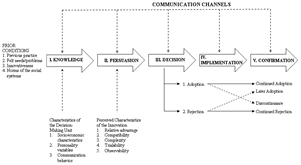 We’ve covered a lot of territory in this episode, so before we finish, we need to pause and reflect on the important contributions from this particular theory. For John, the most useful aspect is around the five characteristics of an innovation that helps it spread. That is, the relative advantage, compatibility, complexity, trialability and observability. That is what John tries to remember when he is designing a new adoption-related project. It is also those elements that have been included in many other approaches such as the Adoption and Diffusion Outcome Prediction Tool (known simply as ADOPT), which we covered in this earlier episode.

This post has been a deep dive into the diffusion of innovations theory, right from the start of the work on the spread of hybrid corn! But it is really only the start of the conversation though, as reviews and critique of this work has highlighted a few areas of concern. We will deal with those in a follow up episode because we want to spend some time on this.

Well, you have read our thoughts, now we would like to hear yours! Add a comment below the blog post and tell us about your experiences with the Diffusion of innovations, including any tips and further ideas about it. We don’t want this to be just a one-way conversation – join in by sharing your thoughts and ideas with us! And remember that in a future episode we’ll be dealing with some of the criticisms of this theory, so keep those comments till later!

Thanks folks for reading this Enablers of change episode. Remember to subscribe to our newsletter if you’d like to know when new episodes are available. And if you liked what you heard, please tell your friends so they can join the conversation!

Green, E. D. (2016). What are the most-cited publications in the social sciences (according to Google Scholar)?  Retrieved from here.

How do you explain the non-adopters? Is it because they are foolish or you have other explanations. How do you see the human element? I think the problem with the diffusion theory is that it takes research results as the solution for every problem or taken for granted.

Good questions thank you Sherif! I think there can be many valid reasons for people to choose to not adopt a particular innovation. Let me share an example from my own life. I used to live in a house that had a large yard with a lot of grass to mow. Both my neighbours on either side upgraded their push lawn mowers to ride-on mowers. The time came for me to replace my mower but I chose another push mower. It took me longer to maintain the yard, but it gave me some physical exercise which I didn’t get from… Read more »

What’s so wrong with the Diffusion of innovations theory?

Take a break and increase your productivity

How to get greater impact from your events

Have you ever been to a training course and become all excited about putting some new strategies into place, only to find that a… Read more »How to get greater impact from your events

wpDiscuz
2
0
We would love to hear your thoughts, so please comment!x
()
x
| Reply