What is the ideal group size for a breakout room?

It is now relatively easy to create breakout rooms in several webinar platforms, but what is the ideal group size for them? In this episode we’re going to explore whether it is two or twenty-two, or somewhere in between.

John was recently in an online meeting where he was placed in a breakout room with about 20 other people, which was a rather unsatisfying experience for him and we assume most others in the group. We think we know why they chose to do that, but we will come to that later.

The question about ideal group numbers is part of the meeting design phase, so we need to be clear about why we are forming small groups in the first place. We will run through some of the scenarios and discuss the effect of group size.

If we are wanting to generate ideas, then we will want small groups of around four people. But remember to allow people to first work individually to quietly jot down the ideas that come to their mind. The old fashioned brainstorming method of a group of people excitedly calling out ideas is not as effective as assumed – we debunked that myth in an earlier episode.

To merely share information and receive somewhat limited feedback, you can use larger groups of say 10 to 20. But if you want to explore and validate ideas, small groups of about four are ideal. That allows all the participants to feel that they have contributed to the discussion and then have ownership of the material generated. It also works well to have people work in groups of four, and then come together with another small group of four to share and build on existing ideas. Even though the groups are now eight people, the participants already have had the opportunity to share their ideas and thoughts in the smaller group. They now share those ideas with another small group to receive their feedback.

You may be wondering how to actually combine two breakout rooms, as that is not a standard feature. Well, Zoom allows attendees to move between the breakout rooms, so as long as everyone is using a recent version of Zoom (v5.3.0 and above) and the host has enabled that functionality in the back-end, then it should work. Firstly, explain the process before people move into the breakout rooms, by saying that after 10 minutes (or however long you choose) you will broadcast a message to everyone that it is time for groups to join together.

Then you explain that the attendees in each odd numbered room just need to click on the breakout room icon and move themselves to the next even numbered room. So hopefully the attendees in room 1 move into room 2, while those in room 3 move into room 4, and so on. If anyone is unable to do this themselves, then of course the webinar host can move them to the rooms. The trick is that the attendees need to note their room number (such as 1, 2, 3 or 4) as soon as they enter their breakout room. They can see this in the top left hand corner of their breakout room screen.

Why is four the ideal group size? Of course you can have groups larger than four, but the participatory experience for each person will decrease with each extra person joining the group. You may be familiar with Dunbar’s number, often quoted as 150, as being the maximum number of people with whom we can maintain social relationships (Dunbar, 1992). Interestingly, that was based on the correlation between the brain size of primates and their average social group size, and was later extrapolated to humans. Dunbar described it as ‘the number of people you would not feel embarrassed about joining uninvited for a drink if you happened to bump into them in a bar’ (Dunbar 1998, p. 77).

The same Dunbar co-authored a paper with Duncan and Nettle in 1995 that showed that there’s an upper limit of about four when it comes to the number of individuals who can engage in spontaneous conversation (Dunbar, Duncan & Nettle, 1995). As shown in the diagram from their article, the more people that are involved in the conversation, the less the proportion of time each person is able to speak. 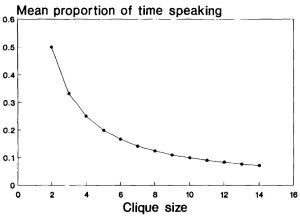 So that is for a group of people having a conversation amongst themselves. What about when a facilitator guides the discussion, instead of people talking amongst themselves? This allows more people to feel engaged, and while we are not aware of any scientific studies around this topic, our rule of thumb is to keep each group between 5 and 10, and no larger than 15. Above this number it gets increasingly difficult for the facilitator to guide the conversation, and increasingly frustrating for the participants to feel they have had an opportunity to contribute. If you have access to more facilitators, it is then better to split the groups into smaller groups.

This is particularly important for online meetings, as participants are easily tempted to check their emails or social media feeds when they are not engaged in the meeting. By the end of the meeting, they may have caught up on a few emails, but will most likely feel dissatisfied with the online meeting. This is why John felt somewhat disengaged in the breakout room he was sharing with 20 or so other participants, as they were wanting each group to actively engage with a topic but only within 20 minutes. That gave each of the breakout room participants just one minute, which was not nearly enough time!

So now we know… if we are going to use breakout rooms in our online meetings, we need to keep them small if we want people to actively engage. Four is the magic number and for every extra participant above that, the less satisfying it will be for all involved.

Well, you have read our thoughts, now we would like to hear yours! Add a comment below the blog post and tell us about your experiences with using breakout rooms, including any tips and further ideas about it. We do not want this to be just a one-way conversation—join in by sharing your thoughts and ideas with us!

Thanks folks for reading this Enablers of change episode. Remember to subscribe to our newsletter if you’d like to know when new episodes are available. And if you liked what you heard, please tell your friends so they can join the conversation!

Thanks very much John. This makes great sense. In psychology the magic number we were always taught for maximum size of a group is 10, and that was well before online existed. In focus groups, where intense interaction is sought, 10 is also the recommended maximum.

Thanks Helen… that’s good to know!

Thanks John & Denise, this was nice confirmation of what I have intuitively thought and also have experienced large group anonymity and disengagement – Loving your tweaked website and looking forward to some Tassie mint kitkat!

Haha, thanks Michele! I’ve been surprised how some people have been promoting hybrid events as the next great thing, which got me thinking more about the concept and why I struggle with it. Enjoy the KitKat!

Why hybrid events are often horrible!

Are you thinking of running a hybrid event where you have attendees both online and physically present in one or more venues? You might think… Read more »Why hybrid events are often horrible!

Thanks to COVID-19, the prevalence of online meetings has dramatically increased. But unfortunately these are often unsuccessful. In this episode we explore one simple… Read more »One simple technique to improve online meetings

Preparing for a successful webinar

wpDiscuz
4
0
We would love to hear your thoughts, so please leave a comment!x
()
x
| Reply