Use prequestions and boost the learning from your videos

What’s one thing you could do to boost the learning from your short videos? Seriously, stop for a moment and think about it. What could you do if you wanted the viewers of your videos to better remember your content?

There’s been a huge increase in the use of short videos for getting our extension messages across to our target audiences. Most people prefer to watch short videos, especially if it’s to learn a practical skill such as pruning. While focusing on the number of views our video has received can be heart-warming, it’s even better if we can focus on the real outcome, which is usually increased knowledge or even practice change.

A study in 2017 published in the Journal of Applied Research in Memory and Cognition investigated the effect of getting your viewers to answer some questions about the topic before they watch the video. It turns out that the use of prequestions like this is an effective way to increase learning from videos.

The authors, Shana Carpenter and Alexander Toftness from the Iowa State University in the United States, invited 85 students to watch a short video about the history of Easter Island. The video was broken into three segments, each about two minutes long. Before each segment was shown, half the students attempted to answer two prequestions about the content about to be viewed. Most of the students had to guess the answer and their success rate was less than 5%. Meanwhile the other students acted as a control group and simply viewed each segment.

The authors suggest that prequestions act as an “orienting device”, helping viewers to focus on particular information. Since they got the prequestions wrong 95% of the time, perhaps it also reduced the viewers’ complacency and overconfidence about their knowledge, encouraging them to pay more attention than usual.

So there you have it. If you want to improve the learning from your short videos, consider asking a prequestion at the beginning.

We came across this study a while ago, and have actually been applying it to our episodes. Have you noticed that we’ve been starting with short, provocative questions? Maybe you just thought it was an interesting way to do it. Perhaps it is, which makes it both interesting and useful!

If you’ve used this approach before, or if you have some questions about it, please comment below and let us know. We love hearing from you and enjoy the two-way conversation. In fact our blog has received over 300 comments so far, which is a great result.

Something else which you might find interesting, is that we have people from over 20 different countries now following our episodes. Here is the map – it really is great to see people from all around the world connecting with us! 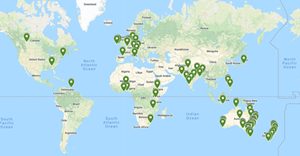 We always knew we had people from across Australia and New Zealand, but we are pleasantly surprised that our little endeavour has been so popular. Especially considering that we do it on a shoe-string budget!

The best way for us to get more subscribers, so that even more people can benefit, is our readers like you telling other people about it. Word-of-mouth really does work, so please think of who else you know could benefit and tell them about it or forward them the emails you receive from us.

All the best until we meet again.

Questions for the win!

It is a great idea to put questions at the beginning.

Flipped learning… how to get people to do the pre-work

We’ve talked about the benefits of using a flipped learning approach before. It can save time during the session, allow deeper exploration of the… Read more »Flipped learning… how to get people to do the pre-work

Boosting communication impact with the rule of three

What is the simple, proven, powerful rule that we can use to boost the impact of our communication? In this episode, we’re going to… Read more »Boosting communication impact with the rule of three

Using VR and AR in extension to add an extra dimension

Have you heard the acronyms VR and AR before? If you’re like us, you might be saying yes, but not really sure what each… Read more »Using VR and AR in extension to add an extra dimension

wpDiscuz
2
0
We would love to hear your thoughts, so please leave a comment!x
()
x
| Reply